Posted at 10:35h in Pizza Facts by witty

How long do you cook a three minute egg? The answer seems obvious….as it’s found in the question. Let me explain.

In the mid-20th century there was a wildly popular program called You Bet Your Life, hosted by Groucho Marx, a member of the famous Marx Brothers comedy act (Chico and Harpo were the other members). They had a very successful career in vaudeville, on Broadway, and in motion pictures.

The highlight of You Bet Your Life (YBYL), which began on radio in 1947 and expanded to TV on NBC for a decade long run from 1950 to 1961, was always Groucho’s famously fast zingers and his banter with contestants.

YBYL was a comedy show with a bit of a tenuous connection to a game. Two contestants meeting for the first time worked together to answer a series of questions to win prize money. They had to answer four questions correctly and if they made two incorrect answers before reaching four correct, they were eliminated. If they did succeed in reaching four correct they would win $1,000. They could keep that prize or continue to play with the ultimate prize being $10,000. If they failed to answer four questions correctly they could win a small amount of prize money by answering a consolation question.

The consolation prize questions were so patently obvious that there was virtually no chance that the departing contestants would answer it incorrectly. Many of the questions were used over and over. Some examples included, “Who is buried in Grant’s tomb?” “When did the War of 1812 begin?” “What animal do you get a bearskin from?” “What color is an orange?” “Is a TJ’s take and bake pizza cooked?” Ok, ok we told a little white lie on the last question. Even though we’ve been in business a long time (almost 20 years) we were not around in the 1950s. Yet, I think you get our drift.

“Is a TJ’s take and bake pizza cooked?” is the kind of question that Groucho Marx would have asked so that a contestant could take home a consolation prize. Yet we have received online comments frequently that we sold a customer a raw pizza. (Seriously, it happens.)

At TJ’s you can indulge in our delicious pizza three ways. Dine in our restaurant and enjoy a piping hot pizza, order takeout of an inhouse baked pie, or order a take and bake. Just remember, a take and bake is self-explanatory. We make it and you take it home to bake it.

Watching a rerun of YBYL, Groucho asked a contestant a question that we asked at the top: “How long do you cook a three minute egg?” Answer: “Soft boiled or hard boiled?” That’s right up there with asking if a TJ’s take and bake pizza is cooked!

For eons the only way that pizza consumers could be sure to get the freshest, hottest, crispiest possible pie at home was to make it themselves. But for many that was a daunting task. Sure you can order a pizza to be delivered, but it might not arrive till the 4th quarter of the football game and there’s a good chance that it will be lukewarm and soggy with translucent congealed cheese.

Want to avoid all that? Try a TJ’s Take and Bake pie. 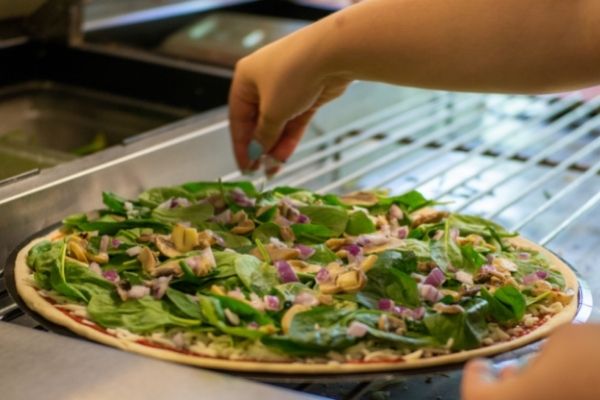 Our pizzas are made with a signature Italian blend sourced from the best purveyors.

It all comes down to the crust, literally. Which is why we developed something for everyone. From traditional hand-tossed to thin to ultra-thin, and even a gluten-free version.

Sausage, pepperoni, meat cravers, veggies, beef, bacon, and more- – our ready-to-go take and bakes come in an assortment of family favorites. (And you can always build your own.)

Benefits of ordering a TJ’s Take and Bake Pizza

As Fresh As You Can Get

Made fresh when you order it and with the same love you find in our restaurant. If your schedule changes, no worries, just refrigerate our freshly made pizza and you’re all good for a few days.

In Your Oven – On Your Schedule

A TJ’s take and bake pizza is a natural crowd pleaser, because it fits your ever busy lifestyle while still providing a quality dining experience.

Prepared Just Like It Is Prepared at Our Restaurant

Order a specialty pizza or create your own hot, crispy delicious pizza. Exactly when you want it and exactly how you expect it. 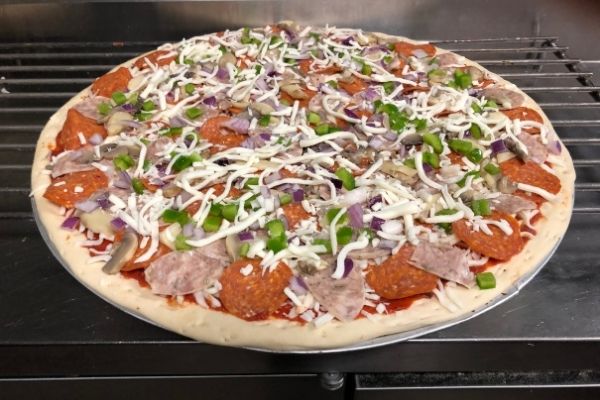 TJ’s take and bake pizzas are convenient and perfect for small social gatherings or your special party or event.

A Quick Look At Take and Bake History 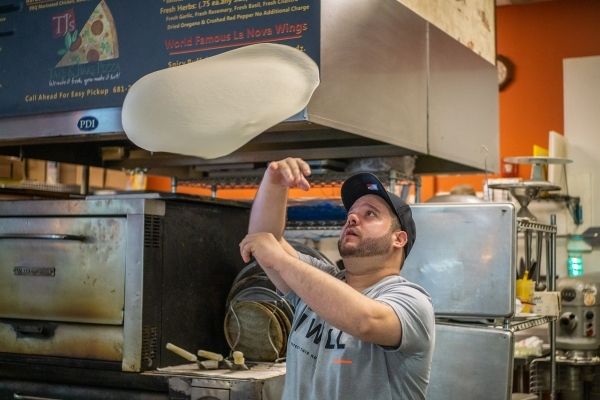 All the pizzas at a Papa Murphy’s store are made there, but not baked there. There is no dining in or takeout of a cooked pizza, thus they require less restaurant space and equipment. As a result, they are, to some extent, able to undercut the national pizza giants. However, their limited options have affected their bottom line and they have struggled of late.

At TJ’s we did some research and found an early pioneer of take and bake pizza in an article in The New York Times dated June 28, 1950. It seems that a Boston baker, Leo Giuffre, who was already producing ready-to-cook pizzas in his hometown, decided to expand to New York City. The pies began to show up in markets in Manhattan and Queens.

The pies were kept under refrigeration, but not frozen, and sold for 49 cents each. Directions and the label suggested baking them 15 minutes at 350 degrees but The Times test kitchen found better results at 375 degrees. The Times reviewer found the cheese and tomato pies tangy, “delightfully seasoned with oregano,” and with a bread texture crust. The writer went on to say that if you wanted a more elaborate pie then scatter anchovies and mushrooms, bits of bologna (not so sure about that one), or green pepper on your pie. Within a month, Giuffre’s plant in Long Island City was producing 3,000 pies daily. Unfortunately, the story ends there. Further research did not turn up anything more on Leo Giuffre and his take and bake pizzas.

In September of 2021, Jay Leno rebooted the old YBYL show basically mimicking the Groucho Marx format. On a recent show Jay asked a contestant to name the four presidents on Mt. Rushmore. The contestant said, “Washington, Jefferson, Lincoln, and Roosevelt.” Jay then asked, “Which Roosevelt?” The contestant responded, “There’s more than one?”

Over the years, some people gave incorrect answers to Groucho’s consolation questions. Of course, the vast majority gave correct answers. So if a contestant can’t answer “Who is buried in Grant’s Tomb?” correctly, then we will give a customer some leeway when they are stunned that their take and bake pizza is uncooked.

So, if you are the person that, upon arriving home and opening your box unexpectedly finds an uncooked TJ’s take and bake pizza, no need to fret. No need to answer a consolation question. Just follow the directions, sip on a craft beer or a glass of wine, and in a very short time indulge in a fresh, hot, crispy, TJ’s pizza….AKA The Best Pizza on Hilton Head Island.

Ok, we realize that you flubbed the question but this is different. You are not on You Bet Your Life. You are in the comforts of your own home. And best of all, delicious TJ’s take and bake pizza is a winner, not a consolation prize.